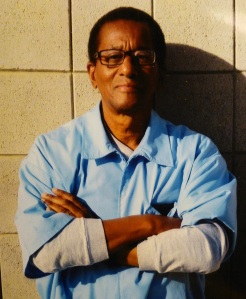 It has been nearly 35 years since Michael was falsely arrested, charged and sentenced to Life Without Parole (LWOP).

In Michael’s own words:

I was tried separately from my co-defendants.

The jury found me guilt of first degree murder, but, they found that I did not personally use a weapon in the commission of the crime.

The jury did not consider me to have been the actual shooter or killer.

The trial jury could not agree on punishment during my penalty trial, and a hung jury was declared.

A second penalty trial jury was impaneld and this jury recommended that I be sentenced to life without parole.

Some of the jurors said that they only recommended this sentence because they did not have any other choice. They said that if they could have recommended a sentence less than that, they would have.

On the day that one of the prosecution’s witnesses claims I was at her apartment in Los Angeles, I was in San Diego, CA, visiting friends, and I had been there for a few days. March 6th is the birthday of my youngest son. And March 5th, 1985, was his one year birthday. I could not be with him on this day because I could not make it back from San Diego in time. I did call his Mother to make her aware of this. And I spoke to my son on his birthday.

The people I was visiting in San Diego had a brother who was incarcerated at the time, and he called while I was at the home of his sister, whom I was visiting, on his birthday. His birthday was also on March 6th.

The mother of my youngest son, as well as the people that I was visiting in San Diego, and the brother whom I spoke to on the phone while in San Diego, were all willing to come to court to testify to this. I also have affidavits from them.

None of them were called to testify on my behalf.

We have a Legal Fund now so that we all can contribute to/donate to hire a lawyer for Michael, so that he can eventually go back to court. Michael’s own alibi’s have not been heard.

Please donate whatever you can, and share this link:

THANK YOU SO MUCH!